The ESRI PUG (Petroleum User Group) meeting is wrapping up this afternoon in Houston, and I am coming away with a few themes that were prominent.

One is that we are awash in data, but there are huge challenges in discovering, accessing, and retrieving that data.

Another topic that was pushed hard by ESRI's development-meister Clint Brown, is that the Web and online services is the future for GIS.

And third, the is strong consensus on what I call interoperability although that term was not specifically heard that much. But the challenges of dealing with vast arrays of data, using online resources and tools stated above, are addressed by the broad concept of interoperability and all the 'stuff' that makes that happen.
Posted by Lee Allison at 11:39 AM No comments:

There seems to be agreement in the petroleum industry to establish common metadata standards and applications for discovery and retrieval of digital information. The goal is to support both proprietary data and exchange of data between companies.

The Metadata Working Group forum this morning at the ESRI Petroluem User Group (PUG) annual meeting in Houston proposed a metadata foundation based on ISO 19115 for the North American Profile (NAP) with a newly developed Energy Industry Profile. Secondly, the group recommended that the not-for-profit standards consortium, Energistics, serve as custodian to maintain and support the metadata infrastructure.

Scott made the point that the metadata is for all information, not just geospatial, to promote the concept that geospatial data are an integral component of the data environment and not something separate. Also, the metadata proposal here is much broader than just the PUG.

The audience was fully in support of the metadata proposal outlined today. The organizers met afterwards to lay out a 12-14 month timeline for a position paper, and developing a robust plan to bring to industry. Participants are expected to be energy companies and industry vendors.

Scott sees GeoSciML serving as the data exchange standard to create an end-to-end process for data discovery, access, and exchange.
Posted by Lee Allison at 11:37 AM No comments: 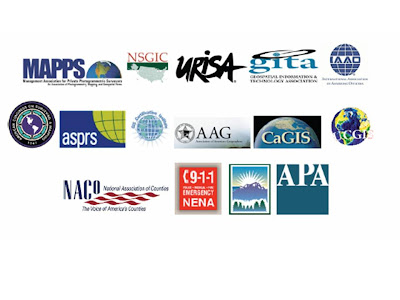 The Coalition of Geospatial Organizations (COGO) made what may sounds like an obscure bureaucratic proposal recently, but one that could have profound impact on the nation’s geospatial infrastructure. They recommended that Congress include ‘geospatial’ in the name and mission of an existing subcommittee in both the House and Senate to oversee geospatial data and activities.

Currently, responsibility for oversight and authorization of Federal geospatial activities is spread among 30 House and Senate committees and subcommittees. That means there is no consistent national policy and in fact, with geospatial duties scattered among 40 Federal agencies and critical business lines run by the Office of Management and Budget, the plethora of Congressional bodies may create numerous “national policies.” It reminds me of the famous parable about 30 blindmen describing an elephant by each one feeling one part of the massive animal. Each had a completely different interpretation of what it was.

COGO is a coalition of 15 national professional societies, trade associations, and membership organizations representing over 30,000 professionals in the geospatial field [member logos above].

They note that the U.S. government doesn’t even know how much it spends on geospatial information. The last estimate, in 1993, was over $4 billion. That strikes me as ridiculously small for what must be going on today.

The COGO proposal is a sensible proposal that could have explosive ramifications by facilitating a truly national imperative for dealing with geospatial data.
Posted by Lee Allison at 8:37 PM No comments: